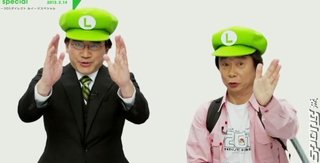 Nintendo plans to launch new hardware for emerging markets as soon as next year according to the company's president, Satoru Iwata.

"We want to make new things, with new thinking rather than a cheaper version of what we currently have," Iwata told Bloomberg in an interview. "The product and price balance must be made from scratch."

Iwata also said in Nintendo's financial briefing that Nintendo is studying regulations in China following the lifting of the country's console ban. Microsoft has already announced plans to launch the Xbox One there.

Back with Bloomberg, Iwata once again addressed the question of whether Nintendo games could hit smartphones.

Publishing on smartphones could, Iwata said, hurt other parts of Nintendo's business.

Nintendo has also just announced a range of Skylanders-style figures for Wii U and 3DS that it seems to be treating as a 'platform' rather than an accessory range.
Companies: Nintendo
People: Satoru Iwata