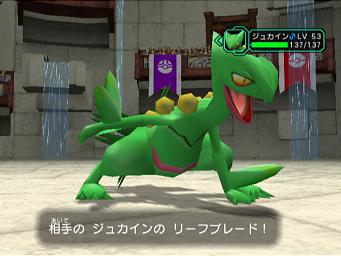 All Images (5) »
Nintendo finally got around to showcasing 3D renditions of their favourite Pokemon in 2000 when Pokemon Stadium hits shop shelves.

Now Pokemon fever is poised to strike again as avid fans prepare for the launch of Pokemon Colosseum. Produced for GameCube no less, this direct sequel pits up to four players in the infamous Pokemon battle arena with 200 hundred of their favourite Pokemon, all realised in full 3D.

Once again, players will be able to download data from Pokemon Ruby or Sapphire via a link cable before testing their skills against both friends and computer opponents.

We know it?s more of the same, but it?s going to be bigger and better than ever before.

Worth buying a GameCube for? It just might be...
Companies: Nintendo
Games: Pokemon Colosseum