You wake up in a mortuary, zipped into a body bag. Corpses lie scattered all around you. You remember nothing, but the nightmare has just begun. 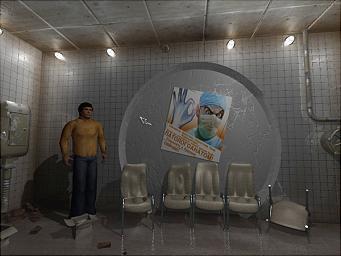 All Images (3) »
Set for release on March 19, 2004, Midnight Nowhere will immerse you in an atmospheric world of horror and suspense, in which even death offers no release. Packed with fiendish puzzles, gruesome murders, twisted morals, and corpses - lots of corpses - Midnight Nowhere also mixes in sexual perversion, sick satire, and a dash of necrophilia. Prepare yourself for the most disturbing game of the year.

The Setting:
The player awakes in the morgue of an empty, decaying hospital, littered with corpses and the debris of disaster. Outside, the city is deserted, stalked by a supernatural serial killer (it seems), and cordoned off by the army. The game starts of with the feeling of 28 Days Later and the Resident Evil games - the deserted city, spattered with gore - but soon develops into something much more twisted (with shades of Clive Barker, Reanimator, Twilight Zone).

The player's character - wise-cracking in the style of Ash from the Evil Dead films - wanders corridors plastered with posters advertising sterilization (promising "satisfaction at our nurses' hands"), dissection ("after a lifetime of sex and drugs, find your final pleasure with a pathologist") and virtual-reality murder. Here he finds a slew of butchered corpses (remarking "nice tits!" he seems enamored of one body-bag-clad young-lady, in particular), a number of distasteful characters (whom he variously argues with, insults, or beats up), and a series of clues - both to the nature of the evil that overshadows the city, and also to the character's own identity.


The Gameplay:
Midnight Nowhere is a horror-adventure game, with 150 locations packed with fiendish puzzles. The game fills two CDs, and the developer estimates that the game will take 48 hours to play - but many of the puzzles are extremely difficult, and the game could take much longer.

A simple point-and-click interface allows the player to guide the character around a sumptuously pre-rendered world, collecting items and clues in classic adventure-game style. The complexity of the game is in the puzzles, for which walk-throughs will be made available by the release date.
Companies: Oxygen Saturn+
Games: Midnight Nowhere