Third and final section of the interview every Xbox owner must read. 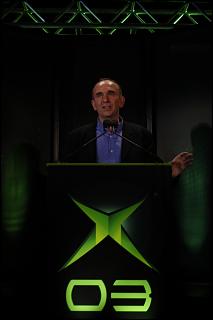 In the third and final part of our exclusive interview with Fable front man, we discuss magic, shopping and gay marriages.

Question: Is it really possible in Fable to push an opponent?s skeleton right out of their body?

Peter Molyneux: Ah yes, the Force Push. It?s one of the first spells we designed actually, and one of the best. At the start, when the player first gains the ability. A small push is performed that does exactly what you would expect, it pushed the opponent back some distance.

But as you gain more experience, the magic becomes stronger. If you specialise in it, it becomes so strong that it does terrific damage to lots of enemies, really great to see? All of the magic abilities have this evolutionary aspect.

Q: Some complaints about Fable stem from the fact that we are yet to see a really vibrant busy city, populated with a whole lot of NPCs going about their daily activities. Can you explain why that is?

PM: Well, the big towns and the activities within them, due to the immense detail, is difficult to show without spending a lot of time in a presentation, and missing the actual gameplay out. That?s one of the main reasons. And the other is that the towns, and the whole Fable world, have a complete lifecycle, a full daylight cycle, people go off to work, kids go to school.

And this breaks down to the point where in some places, a ship will come into port laden with certain goods, these are distributed around the neighbourhood, prices are affected ? a whole supply and demand mechanic.

Q: So there?s a full economic system in place?

PM: Exactly, a full commerce system manages all the trading and pricing of everything commercially available throughout the game world as supply and demand fluctuates.

I mean. If you really want to, you can play the game and get hugely wealthy, buy a hugely powerful weapon and continue questing. You could buy weapon augmentations, which is very expensive to do, and carry on the story. You can buy shops, houses, other buildings and really make your mark in a village, or any number of towns. If you want to that is?

Q: So it?s a financial sim as well?

PM: Well, yes and no. I mean when you say that, bear in mind that you are a hero in this world, so if you choose to spend time amassing wealth and buy an ultimately powerful weapon, rather than following the experience system, that is the essence of Fable. I mean, it?s not going to be a tycoon game, but yes, all the shops have their own pricing for certain goods. I mean, that?s how it should be. If you go into a town and offload a lot of something, it will have a knock-on effect of the pricing of that item in the local area. Isn?t that what you want?

Q: So just to clarify, can a player simply spend all of their time just living in a town, collecting money, buying property?

PM: Yes they could, but they won?t progress through the actual game that way. They have to go out into the world at some point and face their destiny. Their mother and sister have been abducted, and the power that is responsible for this, and other misery, has to be faced at some point of course?

Q: Have you played Animal Crossing?

PM: Yes I have. And Fable shares certain properties with Nintendo?s game. In Fable, you will buy a house. You?ll be able to buy things for your house. Why? Because it?s your house and you should be able to. Things like furniture, pictures, you know the sort of thing. When it comes to getting married, this is very important. Your prospective wife will be very impressed with a nice house.

And when you are married, here?s a tip. Don?t leave all your money at home. She will go shopping and she will spend it on things for the house. You?ll come home, there will be a nice house, but no money for anything else?

Q: We?ve seen that the character?s hairstyle, facial hair, tattoos and so on can change throughout the game. What about their clothes, as this is very important to RPG players.

PM: Yes, absolutely. Everything you can think of, shoes, trousers, jackets, shirts, right down to underwear can be bought for your character. Suits of armour? everything.

Q: Is there a giant dragon in the game. Can we see it?

PM: Yes there is a big dragon. No, you won?t be seeing it pre-release. We have to keep that kind of thing for the game.

Q: When is Fable due out?

PM: I really don?t know at this point.

Q: Well we?d say about quarter 4 of next year looks most likely?

PM: Well. I mean, we?ve built the world, the infrastructure is in place. The story is complete, almost all of the human and creature and weapon models are complete. And it would be a shame to not then take the time it takes, and the time the game deserves, to make Fable truly brilliant. To make everything cohesive and flowing and immersive and feel like a real world. It has to be polished to the extent that it becomes absolutely amazing and that is the answer to the question.

Q: What?s so special about children in the game? Is there anything significant about your own children?

PM: Children, your own children, are significant, very much so. But that?s all I?ll say about that for now.

And on another point we realised that in a game, nothing bad can happen to any children, otherwise the whole world would come doen on you like a ton of bricks. Having them in changed Fable somewhat, with the realisation that you cannot use weapons in town where and when there are children about. No question about that?

Q: And finally, is it possible to have gay relationships in Fable? Gay marriages?

PM: Do you know, I went to Germany and they said that the number one asked question was whether or not same-sex relationships would be in the game!? And personally, I see absolutely no reason why there shouldn?t be, though some people would not like it and in some places it would be enough to have the game banned so I doubt it very much. Hey, we might release a hack to allow it, how about that! When it comes out, you can try and chat up blokes, but it won?t get you very far!

Still to come: world exclusive hands-on impressions and screens, as well as an amazing chance to be involved in the actual design of one of the world?s biggest ever video games. It's all coming your way in the next few days!
People: Peter Molyneux
Games: Fable