As lure for Leaf Green and Fire Red. 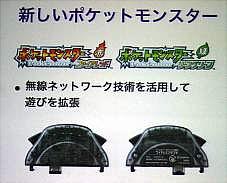 Nintendo Japan has shown a wireless adapter for the Game Boy Advance, enabling play between up to four consoles.

The device, as ever only announced for Japan at this time, will be bundled free with Pokemon Leaf Green and Fire Red and was announced by Nintendo president Satoru Iwata this morning at the opening of the Tokyo Game Show, amazingly avoiding the use of his favourite word ?connectivity.? He did however, shake his fist several times.

Although vague on technological specifics, Iwata stated that the adapter utilised ?technology similar to BlueTooth,? and that players could use the machine within a radius of several metres.