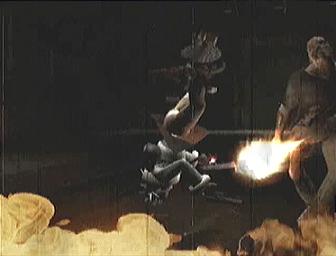 All Images (3) »
Interplay has today announced that it has sold the rights to one of its key franchises to rival Vivendi Universal Games, who takes full ownership of the brand.

In what has to be seen as pre winding-up asset-stripping, Interplay CEO Herve Caen said, "What we have done with the Hunter franchise highlights many of Interplay's strengths: the ability to secure a license, create an acclaimed game franchise from scratch, then leverage that asset to fund future development of the company's core products like Baldur's Gate: Dark Alliance, the recently announced Fallout: Brotherhood of Steel, Icewind Dale, and several other soon-to-be-announced properties."

Although this argument may stand up in the transfer of football players, videogame licensing is a somewhat different animal. Surely if there's life in a brand, it would be foolish to make such a sale.

However, how this impacts on the bigger picture is of tremendous import. As we exclusively reveal some weeks ago, the whole Titus empire might be brought down next week, pending the decision of Virgin's creditors.

The initial creditor's meeting was delayed by some two weeks, we can reveal, by Sony Computer Entertainment Europe whose underwriters were unhappy with entering into talks and requested additional time.

It is known that at the meeting, now scheduled for next week, Virgin will point to the imminent sale of Interplay by Titus in an attempt to avoid going into liquidation, and will claim that this will enable it to continue trading, and reach a repayment agreement. However, the amount banded as Interplay's potential value by Titus exceeds, by an alarming amount, the market capital of Nasdaq quoted Interplay.

Seeing Interplay hawking its key franchises can only serve to dampen any potential suitor's ardour.

We'll keep you fully updated on how this pans out in the coming weeks.
Companies: Interplay Titus VIE Vivendi
People: Herve Caen
Games: Hunter: The Reckoning