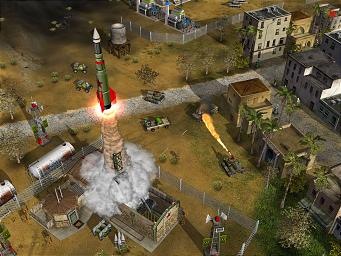 All Images (3) »
Electronic Arts? portrayal of China in the newly released Command and Conquer Generals has caused outrage in the country, making the national news for two consecutive days.

As well as basing a group of nasty international terrorists there, players have the ability to bomb famous landmarks, such as Tiananmen Square.

'It is an insult to China for players to be able to bomb Tiananmen Square at the press of a button,? said one Chinese daily. ?The image of Tiananmen Square cannot be sullied. We will not allow foreigners to treat this as a joke!?

Although the game is not released in China, pirated copies of it are freely available. We?ll let you know if and when EA makes a revision.
Companies: Electronic Arts
Games: Command and Conquer: Generals