Chocks away, Ginger - that was a wizard prang, eh Keith, etc.

617 Squadron gets its own Microsoft Flight Simulator add-on - bally well about time too. 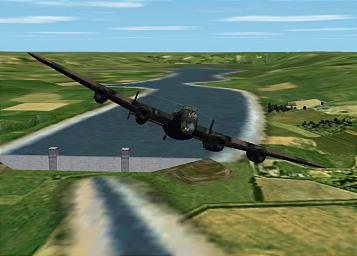 All Images (7) »
In May 1943, the hand-picked crews of 617 Squadron, flying specially adapted Avro Lancasters and led by Wing Commander Guy Gibson, took off from RAF Scampton in Lincolnshire. These brave chaps flew to Germany?s Ruhr Valley, and with Barnes Wallace's ingenious 'bouncing' bombs, destroyed two of the country?s most important Dams and created a flood that put munitions production back by months.

The Dam Busters, as 617 were known from that time onwards, have their exploits recorded for posterity in Just Flight's latest add-on for Microsoft Flight Simulator (wait for it) The Dam Busters. Anyone familiar with the story of 617 Squadron, whether through first-hand tales, the many books on the subject, or the splendid 1954 film of the same name will appreciate that this latest expansion pack captures the excitement of the historic raid and many other operations of the squadron behind it. Gibson?s men were also responsible for the sinking of the Tirpitz, raids on V1 and V2 rocket sites, Bergen U-boat pens and the raid on Hitler's 'Eagle's Nest'.

The Dam Busters expansion pack features a total of 19 missions, and in addition to the Lancasters, you get to pilot a Mosquito and a Wellington bomber ? all great fun for nostalgia buffs and PC gamers of advanced age.

Just Flight?s Dam Busters add-on is due for deployment on September 6.