Ubi Soft and Red Storm present The Sum of All Fears. 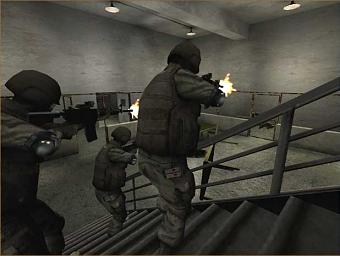 All Images (8) »
The Sum of All Fears puts you in the middle of a high-stakes adventure leading an elite three member FBI hostage rescue team around the globe as you thwart a conspiracy plot against the United States of America. The PC version of The Sum of All Fears is already available in the USA, and will appear in Europe in August, to coincide with the release of the film. Console and Game Boy Advance versions will also follow later this year.

?Players of all skill levels will be instantly drawn in to The Sum of All Fears game through its fast-paced arcade-style action, high-adrenaline gameplay and immersive techno-thriller storyline,? said Laurent Detoc, president of Ubi Soft Entertainment. ?With a streamlined pre-mission stage and preset action plans, The Sum of All Fears allows you to get into the game quickly and start your mission, and we believe that will appeal to the widest audience.?

Developed by Red Storm Entertainment, and based on the award-winning Ghost Recon engine, The PC version of The Sum of All Fears allows players to follow the game storyline via rendered cinematics, depicting vital plot points from the movie and novel. It features multiple game modes allowing you to play individually, as part of a six-player team, or on the Internet where up to 36 players can join the multiplayer action. Players can receive help from up to three AI-controlled teams who follow point-to-point along scripted paths triggered by player actions, resulting in streamlined action-orientated gameplay.