Hey, you with the bulging booth at E3! Show me what you got! 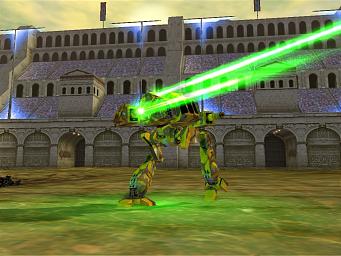 MechWarrior 4: Mercenaries
All Images (14) »
Microsoft's showing at E3, especially in the light of the not-wholly-successful launch of Xbox, is arguably more crucial this year than any other. So, have Bill and the boys got a line-up to turn gamers on, or at least get gamers to turn on their machines? Peruse these new screenshots and see what you think, as we reveal what Microsoft have in store, mostly for their Xbox, with some PC stuff thrown in.

Age of Mythology, developed for PC by Ensemble Studios, transports players to a time when heroes battled with monsters of legend and gods intervened in the affairs of mortal men. It?s a role-playing/god game affair, the clue?s in the title.

Blinx: The Time Sweeper, developed by Artoon for Microsoft Xbox, is a fast-paced action game featuring a cool, clever new character in wild, warped worlds. Blinx is a cat on a mission to fix glitches in time. With the aid of his trusty and powerful Time Sweeper, the TS1000, Blinx recovers lost time crystals and fights Time Monsters in his attempt to rescue a kidnapped princess and return order to the world.

Brute Force is a futuristic squad-based tactical shooter for the Microsoft Xbox, played from a third person perspective, developed by Digital Anvil.

The Microsoft Xbox plays host to Crimson Skies: High Road to Revenge combines the thrills of low-to-the-ground air combat with the swashbuckling style of an action-adventure movie. Players pilot powerful fantasy aircraft in a game reminiscent of a classic Hollywood tale, as they battle enemy aces and navigate tricky stunts.

Freelancer, the long-awaited PC title, is an epic space adventure that combines a deep storyline; the action of 3-D space-combat; the exploration of a dynamic, living universe; and trading in a rich galactic economy where the player?s decisions drive the action.

Kakuto Chojin for Microsoft Xbox is the latest offering from Seiichi Ishii, who previously worked as the designer for "Tobal" and "The Bouncer." No surprise then, to report that Kakuto Chojin is described as a 'gritty street fight' of a game. Fans of beat 'em ups should be overjoyed.

Another fighting game to come to the Microsoft Xbox is Kung Fu Chaos, a quirky brawler from amusingly-named developer Just Add Monsters. Players will become completely immersed in the game as they engage in Hong-Kong-style combat with over-the-top gigantic leaps, suicidal stunts and multiple-opponent action, all while unleashing humiliating insults that can be as damaging as the karate kicks themselves. Very Bruce Lee, very John Saxon, very Carl Douglas!

MechAssault is a futuristic sci-fi third-person shooter game allowing gamers to command a huge walking tank known as a BattleMech. This explosive game is being developed by Day 1, and is coming to rock the Microsoft Xbox.

On a startlingly similar note to MechAssault, MechWarrior 4: Mercenaries is coming to PC. In this, Players control 100 ton Mechs while leading up to eight hired guns into the heat of battle in the quest for the all-mighty C-Bill.

One of Microsoft?s best-loved franchises is due for another spin around the block, and this time on Microsoft Xbox. Midtown Madness 3 provides gamers with madcap, over-the-top racing and driving excitement in two of the world's most fascinating cities: Paris and Washington, DC.

Peter Molyneux?s Project Ego is on show at E3. The man who brought us the stunning Black and White looks like he?s going to make a few more jaws drop in amazement. The premise of Project Ego is that your character's life story is created from childhood to death. Consider everything that could possibly happen in between, and you have a game of astounding potential.

Psychonauts, due for release on Microsoft Xbox, is a wildly surreal action-adventure game in which players use paranormal powers to plunge into the minds of bizarre characters. Players journey deep into crazy worlds of infinite possibility to thwart the secret plan of an evil madman and realise the ultimate dream of joining an elite force of psychic superheroes.

John Tobias, co-creator of the highly successful Mortal Kombat fighting series, is one of the people behind Tao Feng: Fist of the Lotus, yet another beat ?em up coming to Microsoft Xbox. Tao Feng delivers a classic battle between good and evil as two ancient Chinese clans of superfighters, each seeking to uncover the secrets of immortality, battle for dominance.

And finally, a furious, fast-paced action game, Tork introduces a fearless caveboy hero who uses magical powers to transform himself into a bulldozing yeti, an armour-plated armadillo or a swift, flying squirrel on a mission through time. Just another average day in animal-spirited, time-travelling pre-history, then! Tork is due for release on Microsoft Xbox.