Plus: the Hyrule Warriors trailer 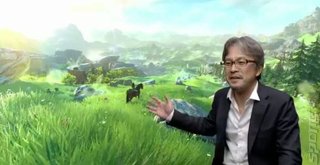 Yesterday, as part of Nintendo's not-at-E3 broadcast, we got a tiny glimpse of the Wii U Legend of Zelda game. Now we've got the footage for you to chew on in your own time.

It features developer Eiji Aonuma discussing what Nintendo hopes to achieve with the game's world design, as well as a snatch of in-game footage.

Companies: Nintendo
Games: The Legend of Zelda: Breath of the Wild