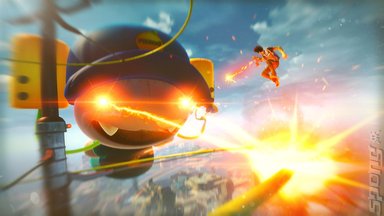 Microsoft's E3 press briefing is still happening, and we've got another release date for you. This time it's for Insomniac's Xbox-exclusive Sunset Overdrive.

There was a bit of a demo from Insomniac boss Ted Price. In it, two factions had overrun and amusement park and Price was trying to get across. There was a mystic dragon gun, inFamous-style rail sliding a grenade launcher and lots of fast, jumpy stuff. And a great big mutant. And Fireballs everywhere.

Except for the mention of eight-player chaos squad. That really is about it, though.