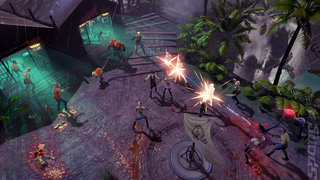 Free-to-Play (F2P) is a curious beast at the best of times. This is mostly because while technically F2P are free to play, they are rarely if ever Free-to-Enjoy-and-Even Complete. Dead Island: Epidemic, Deep Silver's Zombie Multiplayer online battle arena (MOBAA) F2P, isn't making things less complicated either.

The game has entered a closed beta in Steam Early Access as explained thus: "The Early Access Starter packs that we are currently offering are intended for those who want to get into the zombie bashing early and to help us shape the future of the game. They also of course offer players a great starting kit and will grant a few nice exclusive perks - both right away, and when the game hits official open beta and later again at the full launch."

Deep Silver explains that there are, "three different Early Access starter packs and an Early Access retail box... All the various Early Access packs will offer exclusive weapons, upgrades and in-game currency that can be used straightaway or during the upcoming Open Beta phase and at the launch of the final game." There is also a new character called Sam B.

Check out the pricing and options on Steam or at the game's site.
Companies: Deep Silver
Games: Dead Island: Epidemic