New CoD gets an infographic and another new video 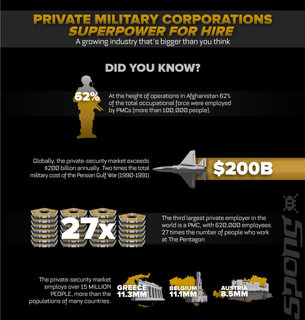 Call of Duty: Advanced Warfare has another new video following on from this morning's video that fore-fronted actor Kevin Spacey. This one features Private Military Corporations (PMCs) which are a godsend if you're trying to sell wargames and don't want to offend a particular market.

You'll also see a handy infographic illustrating this story - Activision sent it to us, we didn't make it up ourselves. To be honest, it's very interesting and not the usual, "Boom! 1,000,000 bullets were used to kill 870,000 enemy campers! Boom!"

It could in fact be that this new CoD game touches on some genuinely interesting real world issues when it comes to the reasons wars are fought today. Here's hoping.