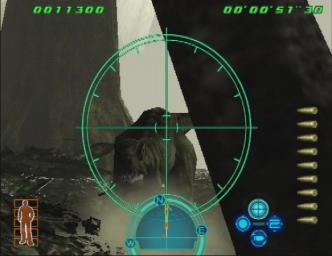 All Images (2) »
Known in Japan as Gun Survivor 3: Dino Crisis; Dino Stalker is a first person perspective shooter based on the highly successful Dino Crisis universe.

It is 1943 and while in combat over the Atlantic the plane of fighter ace Lt. Mike Wired is hit. He is forced to eject and engage his parachute. The enemy plane turns and is just about to shoot the defenceless Wired when time appears to freeze. The plane disappears and in the same moment an unfamiliar weapon appears in his hand along with a mysterious object on his wrist. The plane may have vanished, but Wired is suddenly aware of a new threat - strange flying creatures resembling giant birds are heading menacingly towards him.

Having seen off the attack Wired lands safely in a jungle clearing where he sees yet more strange creatures that remind him of the dinosaurs he learnt about at school. But how can that be, the year is 1943 and dinosaurs have been extinct for millions of years? The strange object on his wrist then crackles into life and an unknown voice informs Wired that he is the only one who can save the world. Confused, Wired pushes on through the jungle hoping to find some answers?

A free-roaming first person shooter, Dino Stalker is broken down into a series of stages all of which must be completed within a given time limit. Players will encounter numerous different species of dinosaurs in varied environments.

Take to the water in a speedboat and go up against the aqueous assault of the Plesiosaurus; dodge the aerial bombardment of the Pteranodons or evade the frenzied attacks of the ground based dinosaurs such as Raptors and Triceratops.

If the thought of a close encounter with a Raptor's razor sharp talons and teeth incites fear then Dino Stalker introduces a unique feature to this genre - a radar system, allowing players to pick up the movement of dinosaurs early. When combined with the sniper-rifle, this feature becomes a very important ally in the fight to stay alive.

Whatever the hunting method or environment, players will have to keep all their wits about them in this classic confrontation between hunter and hunted.