And a Chaos variant to Extinction comes to Ghosts 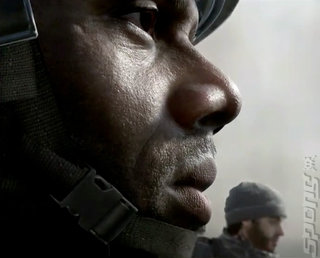 Sledgehammer Games spent some time at the recent Game Developers Conference (GDC) talking about "Quest for Quality: Maximizing the Relationship Between Creative and Production". Sounds cool. But so was the image that was revealed for Call of Duty 2014 - and that you can see here.

The to-be-named-properly game will release in November this year, and has been three years in development. So, that's the future. But what of the present? What of Ghosts?

Well, the latest update introduces comes with new Chaos variant to Extinction among other fixes detailed below but not, apparently, if you're a PS4 or PS3 owner.

As CVG points out, "Chaos was originally introduced as a variant to Call of Duty: Modern Warfare 3's Spec Ops mode. In it, players face off against a never-ending deluge of enemies and must chain together kills to earn power-ups that will help them stem the tide."

Additional Fixes
? Adjusted Domination spawn logic to make it less likely for defenders to spawn near a flag if it is being captured.
? Fix for 4096 error.
? Fix for wiretap perk to work properly in Hardcore modes.
? Fixed issue that classified non-sliding kills as sliding kills if the user died mid-slide.
? Fix to default killstreak highlight to last one selected.
? Fixed issue that allowed the user to navigate menus while accepting a clan invite.
? Fixed flare audio after player leaves helo gunner.
? Fixed hardcore audio alias for kill confirmed.
? Added proper friendly alias for blitz friendly scoring.
? Fix to properly show a popup dialog if a user tries to join on someone from the recently met player list that is a blocked user.
? Added killcam for Night Owl deaths.
? Fixed character scene offset causing misalignment of some characters.

Extinction
? Stability and performance improvements.
? Fixed challenges that were providing more than one skill point.
? Casual mode does not write to leaderboards.
? Fixed issue where player models could appear stuck when taking large amounts of damage at once.
? Improvements to drill placement logic.
? Armor is now invulnerable when the Tank Class skill is active.

Nightfall
? Late joining, spectating and players in Last Stand will now be teleported to the final Breeder fight if triggered without them.
? Fixed case where players could prevent the Breeder from spawning on Nightfall.

Mayday
? Improved alien navigation and pathing.
? Improved wall and ceiling navigation for aliens.
? Updated Kraken smash and cool down logic.
? Fixed ingredient issue where some combinations prevented creation.
? Fixed cases where players could not turn a Rhino into a pet when using a Relic.
? Improvements to clipping to prevent players from getting to undesirable locations.
? Improvements to the Tesla Traps behavior.
? Improved clipping to prevent players from placing the drill in undesirable locations.
? MAAWS stability and tracking improvements.
? Drill cannot be removed from the Drillbot after being placed.
? Replaced the Drill waypoint icon after completing the defend from afar sequence.
? Late joining, spectating players and players in Last Stand will now be teleported to the ? ? ? ? Kraken fight if triggered without them.
? Improvements to pillage locations.
? Deployed items in the lower portion of the ship are removed allowing for new item placement on the top deck of Mayday.
? Friendly Seeder Turrets no longer prevent the gas sequence from triggering.
? Intel audio snippets now play in game after being collected.
? EMP effect from the Kraken no longer impacts skill point menu access.
? Fixed crafting scoring exploit where players would mistakenly receive funds when cancelling crafting.

PC Specific Update
? Fixed rare crash.
? Fixed invites not being processed properly during a loading screen in Multiplayer.
? Fix to return user to the barracks after leaving clan through clan details.

Xbox One Specific Update
? Fixed invites not being processed properly during a loading screen in Multiplayer.