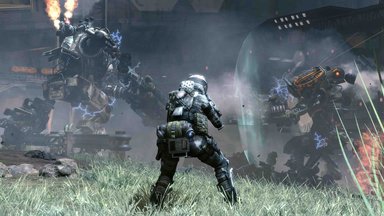 Respawn has detailed some new bits and pieces on the way for TitanFall, as well as outlining the way the studio is approaching its updates.

First, let's get down to what Fukuda called the "more tangible content." Of course, there's the upcoming Expedition pack, but beyond that: "Some of the new content we are developing for future updates include a new Burn Card set, and Titan 'Nose Art' Insignias that you can use to customize the identity of your Titan. We are also developing new game modes and game mode variants."

The way Respawn divies up the rest of the updates goes like this:

It starts with 'tending garden' - minor tweaks and balances, basically.

Next Fukuda mentioned 'convenience features' - "these are not huge infrastructural pieces, but they will make your life more pleasant in Titanfall, and they tend to be related to things you use or do repeatedly." Here Fukuda gave the example of the recent addition of the Party Colours feature, then got on to some of the new stuff:

"The next update will bring more convenience features such as: the ability to rename your custom loadouts and to make custom loadouts specific to each game mode, a way to filter your Challenges by criteria such as 'closest to complete', and displaying the final scoreboard from your previous match in the Last Game Summary so you can review the scores at your leisure in the lobby," Fukuda said.

Finally, there are the 'infrastructural features'. "One example of this is the recent beta release of Private Match. In future updates, we'll be bringing you the first wave of custom Private Match options, allowing you to personally tweak your Private Match experience in a variety of ways." Many of these features will be rolled out in beta form first.