Microsoft to Dig up E.T. the Extra-Terrestrial

Famously rubbish game buried for decades will star in show 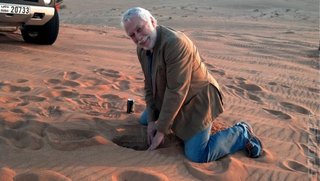 Less than a year after Canadian company Fuel Industries bid to dig up the lost horde of famously awful Atari game E.T. the Extra-Terrestrial (vi Microsoft has been given permission to have a go.

Microsoft, as we reported last year is setting up a documentary season for Xbox Live, and:

"The first film in the groundbreaking series investigates the events surrounding the great video game burial of 1983. The Atari Corporation, faced with overwhelmingly negative response to ?ET the Video Game,? buried millions of unsold game cartridges in the middle of the night, in the small town of Alamogordo, New Mexico."

The local newpaper - The Alamogordo News now reports that, "A planned excavation of an old Alamogordo landfill to search for what has been called the worst video game ever has cleared a hurdle with the New Mexico Environmental Department.

"According to a letter from the NMED Environmental Protection Division Solid Waste Bureau, the NMED has approved a waste excavation plan for the project with some conditions.

"Three companies, Fuel Entertainment, Xbox Entertainment Studios and LightBox Entertainment plan on digging up portions of an old Alamogordo landfill located near First Street and White Sands Boulevard to search for Atari "E.T. The Extraterrestrial" game cartridges purportedly buried there in the 1980s."

So yes, a video game documentary about a terrible video game. Seems a bit self-hating, what do you think?
Companies: Atari
Games: E.T. The Extra-Terrestrial