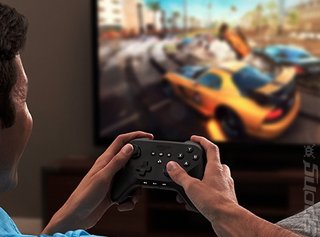 Amazon announced its Fire TV yesterday with Minecraft and other games - including ones from its own studios. Today it's denying that the streaming media box is a games machine.

This is understandable given that as a platform holder, its relationships with clients such as PlayStation could be compromised. It's less understandable when Amazon also hires two major developers. First the denial:

Amazon's VP Pete Larsen told Engadget that Fire TV, "isn't trying to be a game console." So what is it?

Larsen said, "We didn't really think about that. We looked at what customers were doing with the current streaming media devices out. We tried to mine the customer reviews to find what was working and not working. And then we say to ourselves, 'How do we solve those problems?' Which we did, with performance, voice search and open ecosystem."

Yup, nonsense. Of course they thought about it and of course it can act as a games console. Why on earth would Amazon hire Portal designer Kim Swift and Far Cry 2 designer Clint Hockingto the Amazon Game Studios, as Kotaku reports it has done.