New hardware to take on Google and AppleTV has games 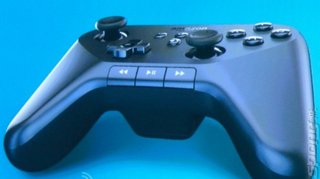 All Images (5) »
"Listen, this thing's tiny, it's incredibly powerful, and it's unbelievably simple," so said Peter Larsen vice president of Amazon's Kindle unit, introducing Fire TV, which costs $99 and is available today

He went on to show the UI for the strikingly AppleTV like device - and yes, there is a Games element in the menu: and it also comes with Minecraft.

In terms of specs the unit comes with a small remote control device with a built-in mic for voice search (see the image), and the following specifications:

• It has dual-band WiFi.

• It has 2GB of RAM. "That's 2 to 4 times more than these other products on the market right now."

• It has a dedicated GPU, "the kind usually found in smartphones."

• It has a quad-core processor.

Introducing the games element was Mike Frazzini from Amazon Games who explained that the games controller - not the remote - costs $40 and comes with some Amazon Coins. Games themselves have "an average cost" of just under $2 at $1.85.

Along with Mojang, Ubisoft and Take-Two are developing for the box - as is Amazon with its own titles.

On the non-gaming front, well. It streams movies and TV.