Confirmed: Sledgehammer Taking on Next Call of Duty 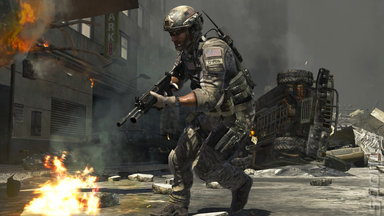 Modern Warfare 3
Activision has confirmed that Sledgehammer Games is, indeed, behind this year's instalment of Call of Duty.

The news came as part of the company's call to investors yesterday. Sledgehammer, Infinity Ward and Treyarch will now handle a CoD game each on a three year cycle, extending development time to three years for each title.

Activision Blizzard CEO Bobby Kotick said that he expects the Sledgehammer title to be "one of if not the best" CoD games yet.

Sledgehammer previously worked alongside Infinity Ward on Modern Warfare 3, so the studio isn't a stranger to the series. It also did work on a third-person action/adventure entry to the series, though development was halted so the developer could lend a hand on MW3.

It emerged last month through job listings that Sledgehammer was working on Call of Duty in some capacity, though it was unclear exactly what the studio's role was.