ETs in the Treeline! Call of Duty: Ghosts Nightfall Trailer

Extinction add-on gets a showing 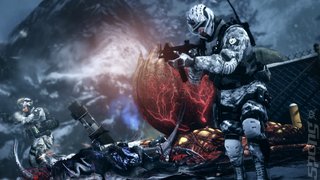 Here's a trailer for Nightfall, which comes with Call of Duty: Ghosts' Onslaught DLC and is the first part in Extinction's four part episodic add-on. So, it may have more titles than any other piece of game content ever.

Activision blurbs the content like this: "At a remote facility in the Alaskan wilderness, the shadowy Nightfall Program has been researching the origins of the "Alien" threat. When the scientists lose control, a small team of elite soldiers must retrieve the intel, exterminate hordes of hostile creatures and survive a three-story tall terror unlike anything they've faced before."

Onslaught hits Xbox Live first. It'll be with us on January 28th.