And this bodes badly for all AAA games. 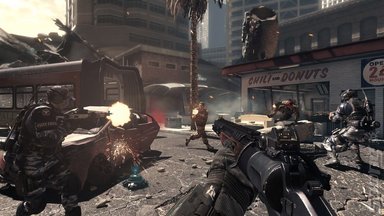 The good news for Activision is that Call of Duty Ghosts outsold all other video games n the USA in November. But there is bad news too.

The bad news is that sales of Ghosts were down substantially in the States compared to those of its predecessor, Blops II in the same period in 2012.

"Call of Duty: Ghosts sales were down 19 percent year-over-year compared to Call of Duty: Black Ops II, according to market-analysis firm Cowen & Company," reports VentureBeat in a report that reflects the same trend experienced in the UK.

Unlike the UK, however, which accepted the 'console transition' reason for the decline laid out by Activision pre-emptively, Cowen analyst Doug Creutz is less convinced.

?Upon further reflection, we think the [Call of Duty] numbers are a bit more troubling than they first appeared. While the year-over-year gap is only 19 percent thus far, that includes two extra weeks of sales for the 360 and PS3 versions [of Black Ops II]. Against 2011′s [Modern Warfare 3], where the difference is only one week, the title is down 32 percent life-to-date.?

Let's see what the New Year sales and all the Xmas consoles have to bring to the sales party.
Companies: Activision Blizzard
Games: Call of Duty: Ghosts