Actually no surprise at all - Call of Duty Ghosts is #1 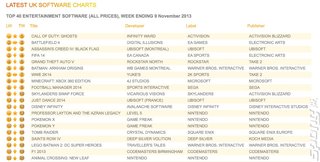 The UK video game charts for all formats and all priced games is in and there is a surprise: Call of Duty: Ghosts manages to make it to #1 despite sales being down around 50% compared to last year's Call of Duty: Black Ops.

According to the figures: Call of Duty: Ghosts reignites the All Formats Top 40, debuting at No1 with the 3rd biggest launch of the year (behind GTA V and FIFA 14).

"Released on Tuesday, sales were split 62% on XB360, 34% PS3, 3% PS4 and the rest on PC and Wii U. Despite Sony's new console not due in stores until November 29th, Activision Blizzard released the PS4 version alongside the current formats. The PS4 version performs spectacularly well for a game that consumers will not be able to actually play for another 3 weeks, managing to outsell the PS3 versions of Assassin's Creed IV and Battlefield 4. Beaten to No1 by Assassin's Creed IV (-63%) last week, Battlefield 4 ( -54%) holds on to No2, outselling the popular Ubisoft title by 6,000 units across their first two weeks of launch.