Call of Duty Ghosts Ran at 1080p on Xbox One 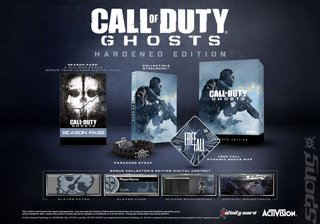 Call of Duty: Ghosts could be running quite happily at 1080p rather than 720p as it is on Xbox One says Infinity Ward executive producer Mark Rubin.

So, why the hell isn't it? We've already been hit with the fact that the game will run in 1080p in rival console, Sony's PS4 so is it hardware related?

Not according to Rubin who explained that, ?Early on, we didn't know where exactly the resolution of anything would fall because we didn't have hardware or the software to support it. We tried to focus in on 1080p, and if we felt like we were on borderline of performance somewhere.

?It's very possible we can get it to native 1080p. I mean I've seen it working [on Xbox One] at 1080p native. It's just we couldn't get the frame rate in the neighbourhood we wanted it to be.

?And it wasn't a lack of effort. It wasn't that it was like last minute. That call wasn't made until a month ago."

He continued to tell the site that, "?There's no specific, oh, well, the VO chat on Xbox took up so much resources that we couldn't do 1080p native. There's no definitive one to one per se cause and effect. It's just an overall thing.

?I definitely see/hope both platforms will look way better the next time we get a chance at it. As an obvious analogy ? and if people are not sure about this it's pretty simple ? look at Call of Duty 2 versus COD 4. It was a massive leap forward in graphics, and that's just because it takes time to get through this.

?First launch, first time at bat at a new console is a challenging one. That's just the way it is. For people fearful one system is more powerful than the other or vice versa, it's a long game.?