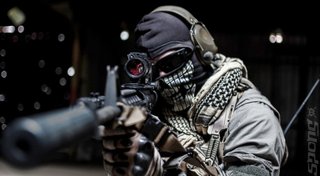 Infinity Ward's Mark Rubin has told the world that CoD players are not hardcore... or he hasn't. Before you grab arms (keyboards) and hurl abuse into the comments section, let us clarify that Mr. Rubin didn't mean all CoD players... just some of them.

The original quote came from the Executive Producer at Infinity Ward when speaking to OXM, where he suggested that Call of Duty players "aren't hardcore gamers". As you can imagine, this caused quite a fuss.

"We have an enormous amount of players who are more in the casual game space, but they play a lot,

"It's kind of a weird, ironic thing to say, they aren't hardcore gamers, or even gamers, but they play Call of Duty every night. And those guys are going to continue to play regardless of platform. So I think not only will we continue to engage with that existing player base, but we'll take next gen and see how far we can go with it."

Unsurprisingly, Rubin received angry Tweets from insulted players. He clarified in one of his own Tweets that "I said there are SOME people that play COD that aren't 'gamers' in traditional sense, not all.".

He went on to double clarify, when he Tweeted "Sorry but whoever read that to you got it wrong, I said we have some players that aren't traditional gamers.".

CoD: Ghosts is due out on November 5th. Why not have a wander over to our dedicated game page - see if there's anything you don't already know on there!
Companies: Infinity Ward
Games: Call of Duty: Ghosts