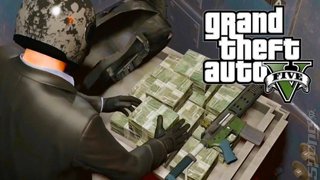 Ok, so we're all aware that GTA Online has been... pardon my language, borked. We've all had to deal with "Rockstar Cloud servers are unavailable" and our characters deleting themselves, but we're almost at the point where Online runs smoothly.

In light of the constant errors and bugs we've had to put up with, Rockstar are offering its customers who play GTA Online during October compensation in the form of 500,000 in-game dollars - the "Stimulus package".

"In order to keep the current worldwide in-game economy balanced, we will be providing this GTA$ to players via two deposits of $250,000. We will announce specific dates as soon as possible, but are currently hoping to be able to make the first deposit by the end of next week (after we?ve confirmed that issues causing game progress loss have been fixed) with the second installment to happen by the end of the month."

It continues "For players who experienced cloud server errors, connection issues, and lost game progress and characters in these first days of GTA Online, we hope this GTA$ helps to facilitate a fresh start or makes your continued life in Los Santos and Blaine County extra sweet."

You must play or have played Grand Theft Auto Online at any time during the month of October 2013 in order to qualify for the GTA$500,000 deposit in your in-game bank account.

Players will first have to install a forthcoming GTAV title update which we expect to happen next week. That title update (1.04) is expected to fix the remaining instances of issues that have caused vehicle purchase loss and will also enable the functionality through which we?ll be providing this GTA$ stimulus cash to players.

We will announce at the Rockstar Newswire when each deposit is made.

Each of the two GTA$250,000 deposits will be made by Rockstar and should automatically appear in the in-game GTA Online bank accounts of eligible players. Beyond downloading the forthcoming title update mentioned above, there should not be any additional special action required by eligible players to redeem.

How have your experiences of GTA Online influenced your overall rating of the game? Is it to be expected with such a big launch, or should these issues have been ironed out before release?

Ratman 11 Oct 2013 15:54
1/1
These things happen and should be accepted by people & as long as they give me a half a million dollars I am certainly ok with this. lol
Posting of new comments is now locked for this page.