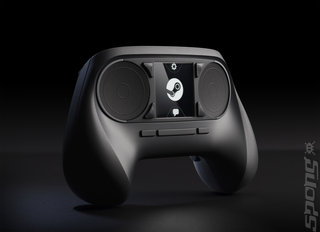 Valve has revealed the third piece of its living room puzzle - the Steam Controller. The company aims to make the controller the bridge between mouse/keyboard gaming and playing from your sofa.

The most prominent feature of the pad is the replacement of dual analog sticks with two trackpads. Valve says that, "The trackpads allow far higher fidelity input than has previously been possible with traditional handheld controllers." The pads will also be clickable, the company says.

Valve says the pad will make genres of games that have only been playable with a keyboard playable with a mouse. The company lists "RTS games. Casual, cursor-driven games. Strategy games. 4x space exploration games" as playable with the pad.

The other biggie is the pad's use of haptic feedback. Stating that traditional rumble would not be up to scratch, Valve says that "The Steam Controller is built around a new generation of super-precise haptic feedback, employing dual linear resonant actuators. These small, strong, weighted electro-magnets are attached to each of the dual trackpads. They are capable of delivering a wide range of force and vibration, allowing precise control over frequency, amplitude, and direction of movement."

Finally, there's a touch screen in the centre of the pad. "The screen allows an infinite number of discrete actions to be made available to the player, without requiring an infinite number of physical buttons," says Valve. "The whole screen itself is also clickable, like a large single button. So actions are not invoked by a simple touch, they instead require a click."

The pad will apparently offer backwards compatibility with everything on Steam. The company says that, "Even the older titles in the catalog and the ones which were not built with controller support. (We?ve fooled those older games into thinking they?re being played with a keyboard and mouse, but we?ve designed a gamepad that?s nothing like either one of those devices.)"

This follows news of a Valve operating system for living room machines and a hardware beta.

You can get the full skinny from Valve on Steam.
Companies: Valve

Spinface 30 Sep 2013 12:58
2/2
@ghoti Poor choice of words on our part. I've made a minor amendment. Thanks for flagging it.
Posting of new comments is now locked for this page.