Less linearity, and more stealth too 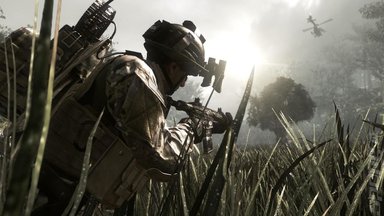 Infinity Ward has said that Call of Duty: Ghosts will feature some campaign levels that are less linear than those of previous games in the series.

Infinity Ward community manager Tina Palacios told Eurogamer that the developer has taken into account feedback from past CoD games, saying, "We even looked to Call of Duty: Modern Warfare for the pacing. In other games it?s usually 11 across the board. It?s always intense. But for this one we wanted to change the pacing of it.

"We also focused on feedback we received in terms of people feeling like they were going down just one corridor. So we wanted to add a variety in terms of the way you felt when you were playing the game."

Palacious said that, "One thing I can tease is you may find yourself in a mission or two where we don?t tell you where to go, where you don?t feel like there?s a pathway to follow, and you sometimes feel completely lost."

Similarly, she said that there will be more stealth missions - albeit with the caveat that the missions will also be do-able using less stealthy means.

There are story details through the link to the Eurogamer piece below. Be warned, though, it gets a bit spoilery.