Infinity Ward Couldn't do Call of Duty Women Until Now 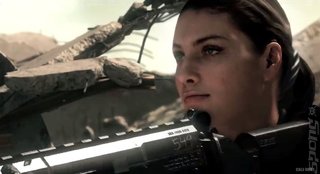 A multiplayer video for Call of Duty: Ghosts has shown the world that, for the first time, it will be possible to play as a woman during online play. Infinity Ward has explained why this has come now and, bizarrely, it sounds as though they just weren't able to implement it previously.

"We couldn't do women soldiers until we did character customization(sic)," executive producer Mark Rubin told Polygon.

No direct quote explaining why female characters couldn't appear without character customisation was given. The Polygon article attributes it appearing now to new engine technology.

Rubin also said it wasn't about attracting new players. "It wasn't us saying, 'How can we attract women to [our game]?'That's not going to do it and that wasn't our goal. What we wanted to do was acknowledge the fan base that already existed. We have a lot of different kinds of people who play [Call of Duty] and we want them to be represented when we do character creation."

Giving a slightly different message Eric Hirshberg, president and CEO of Activision, said that this was the right year to include female characters because of that focus on customisation.

"With that came the right set of tools to choose not only how your player looks and how your player is equipped but what gender [players prefer]," Hirshberg said. "It just made all the sense in the world."

Hirshberg didn't seem to be saying that it wasn't possible previously, just that it's more convenient now.

Either way, you can see the Call of Duty: Ghosts' multiplayer in action in the trailer below.