Peter Moore: Xbox One and PS4 will be 'Spectacular' 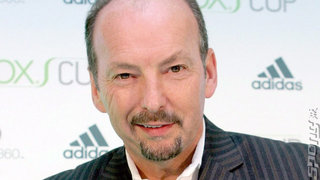 Electronic Arts needs big new console launches, well until it makes its own console that is. So, with the Xbox One and PS4 coming around the corner at the speed of a less well-specced PC, it's time for EA's President and Chief Operating Officer Peter Moore to weigh in with his support.

"Consumers are acutely aware that new hardware is coming," SPOnG's old pal Peter said the ears of fellow EA executives and outside analysts, before really getting going:

"Neither (Sony nor Microsoft) has shared their specific volume targets, but there are outward signs of strong customer demand. Microsoft reports that Xbox One presales are trending ahead of the 360 during the same time period, and major U.S. retailers have sold out of their pre-sell allotments.

"And PlayStation believes this will be their biggest hardware launch ever. So we believe that the key indicators are pointing to a strong launch for both consoles in the holiday window.

Blimey, we're expecting God to actually turn up at both launches after that.