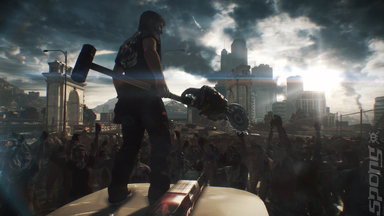 E3 2013
While we've just heard about how Dead Rising 3's game world is multiple times the size of those in its predecessors, it was originally going to be on the Xbox 360. The 360 apparently just couldn't handle it, though.

Producer Mike Jones told Siliconera that, "In terms of building the game, we originally developed it on PC and everything we were doing was breaking the bank on [Xbox] 360. The number of zombies, the streaming stuff we wanted to do, memory budgets for the number of environments and items and physics and all of that stuff."

The solution was Xbox One, and Jones said Capcom partnered with Microsoft "early on" to get the specs and figure out how to get the game on the new console.

Jones added that, "The biggest things for us have been the size of the world, the density of the world, the streaming spaghetti of getting everything working with no load zones and seamlessly streaming. Also, how we build missions in a much larger world like that ? how we send you to different districts and how we get you to explore all of these nooks and crannies in the environment."