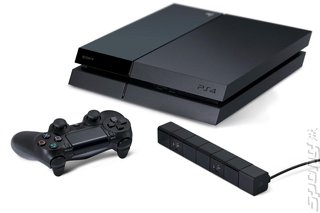 The PlayStation 4 looks great and all, but when in the blazes can we get our hands on one? Well, Sony has been coy in consistently stating that it will launch in the vague 'Holiday 2013' period, but according to two European retailers, the console looks set to release in mid-November.

Dutch outlets MediaMarkt and Bol.com are listing a launch date of November 13 for the PS4 on their websites, while Videogamer reports that NeoGAF forum users have taken photos of in-store advertising in MediaMarkt featuring the date. Seems like they know what they're talking about, with one caveat - November 13 falls on a Wednesday.

Some US retailers have suggested that the console could launch in North America at the end of October. Given that Sony likes to stagger its hardware launches worldwide, a mid-November launch for Europe would fit in nicely with that theory.

Meanwhile, Microsoft's competing Xbox One has been locked down for a November launch in both the US and Europe.
Companies: Sony