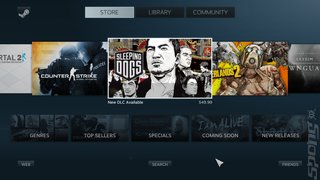 Microsoft has had a hard time trying to sell its Xbox One to consumers. But there are some benefits to the online-only console - like the ability to share your game library with your friends. Seems like Valve is about to rain on that parade, with reports suggesting that a similar feature will soon be implemented into Steam.

According to details discovered in a new Beta version of the popular PC game client, Valve looks set to introduce a system where users can allow the ability for friends to share their titles. But, it will not allow two users to play the same copy of the game at the same time.

A line of code, spotted by Kotaku, reads, "Just so you know, your games are currently in use by %borrower%. Playing now will send %borrower% a notice that it's time to quit." Another line of code states, "This shared game is currently unavailable. Please try again later or buy this game for your own library."

Valve has not officially gone on record to state that it is planning any sort of game sharing service, but if it did - whilst maintained its comparatively more lenient online connectivity policy - it will be interesting to see what Microsoft could do to make the Xbox One's approach a more attractive proposition.
Companies: Valve