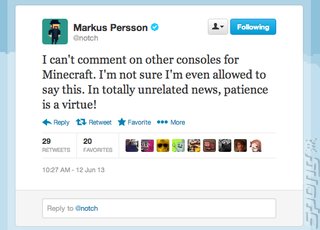 Markus 'Notch' Persson, the creator of Minecraft, has teased the possibility of Mojang's flagship building game arriving on "other consoles". By that, of course, he most definitely means PlayStation 4. Or Wii U.

Just now, the indie developer tweeted that, "I can't comment on other consoles for Minecraft. I'm not sure I'm even allowed to say this. In totally unrelated news, patience is a virtue!" We don't expect the status to be alive for very long.

At present, Minecraft is available on PC and Xbox 360, with a version announced on Monday for Xbox One. A version for PlayStation owners has been long-requested by fans, but until now it seemed like the pleas had fallen on deaf ears.

Of course, it's no secret that Sony has been trying to net Notch for quite some time. The console manufacturer is going big on indie with PlayStation 4, and recently sent an E3 press conference invitation to the Minecraft creator, in the form of a golden PSOne.
Companies: Mojang
People: Markus Notch Persson
Games: Minecraft