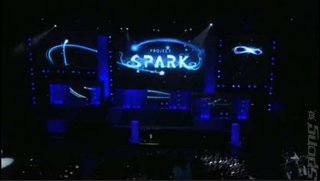 All Images (20) »
Phil Harrison has showcased a number of exclusive games from Microsoft Studios that will hope to energise interest into the platform. Minecraft, Quantum Break, D4 and Project Spark.

To begin, Minecraft: Xbox One Edition promises bigger maps, more multiplayer options and greater opportunities to pack your worlds full of pixelly things. This was followed by a 'gameplay scene' from Quantum Break, which seemed more like a cutscene, impressive as it was. It involved the protagonists investigating an office block in stasis.