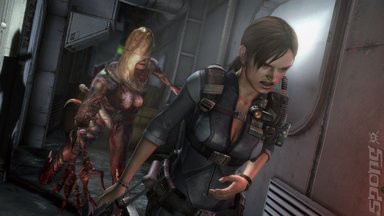 Games! On your Wii U! Who's have thunk it? Well, believe it, because Nintendo has lined up a rather tasty platter of digital content for you to download right onto your console this week. Resident Evil? Super Mario Bros 2? Cheap Super Metroid? Oh my!

A free demo of the upcoming Resident Evil: Revelations will land on the eShop on May 14 (that's tomorrow), giving players a taste of submarine-based horror action. On May 17, the Wii U Virtual Console will be updated with Super Mario Bros 2 on NES (Ł3.49) and Super Ghouls 'n Ghosts on SNES (Ł5.49). Remember, you'll get discounts if you already own them on Wii.

The Famicom 30 Anniversary promotion continues this week as well, with Super Metroid becoming available for the princely sum of 30 pence. It'll be set at that price until June 14, so get on it.

Nintendo is also updating the 3DS eShop this week, with GUILD 02 game The Starship Damrey and Mega Man 5 on Virtual Console seeing a release on May 16. The digital release of Pokémon Mystery Dungeon: Gates to Infinity will follow on May 17.

See anything you like? Let us know in the comments section below.
Companies: Nintendo
Games: Super Mario Brothers 2 Super Metroid