Could a GT6 reveal be imminent? 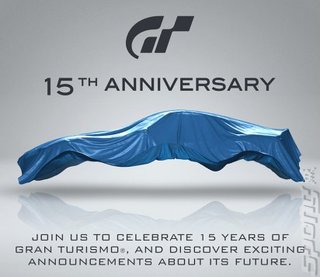 Gran Turismo fans, wake up! There's something stirring at Sony Computer Entertainment Europe, as the firm has been sending out invitations to a special event celebrating the car franchise's 15th Anniversary... as well as a potential reveal of Gran Turismo 6.

The event is to take place on May 15, at the Silverstone Circuit in Northamptonshire. Invitations include the phrase, "Join us to celebrate 15 years of Gran Turismo, and discover exciting announcements about its future."

Of course, everyone is expecting Gran Turismo 6 to be mentioned in some form at the party. The game was practically announced way back in 2010, when series creator Kazunori Yamauchi talked openly about it in an interview.

Retailers have started to publish listings for the sequel too, ahead of a release on PS3 later this year. It's a matter of time before any GT6 information gets swamped with PlayStation 4 hype, so news should be incoming. We'll let you know what gets revealed at the event next week.