FIFA 14 to Get 'Speed' Fixes and UI Changes

Based on player feedback. 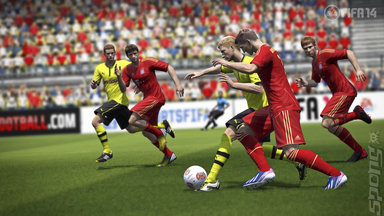 We all know about the main improvements to FIFA 14. You can read all about the well-documented Protect the Ball, Variable Dribble Control and Teammate Intelligence right here. But beyond that, EA has revealed to SPOnG that it also intends to improve the game's pacing and UI.

Producer Sebastian Enrique said in an interview with SPOnG - which you can read in full here - that players had complained about the 'speed' of FIFA 13. "People were saying that the game was too fast," he explained. "Now, we needed to interpret exactly what that feedback means, as well as listen to it.

"Because in this case, the reality is that the game speed hadn?t changed in the last two or three years. So we had to think of what was causing players to experience this."

The result of the studio's investigations was that extra mechanics that were introduced in last year's football game had somewhat "changed the dynamic... encouraged players to sprint all the time.

"That wasn?t something that we did consciously, of course, but we found that many players were just darting from box to box for the whole match." Enrique added that a UI change in Career Mode was one of the more requested things from FIFA fans, adding that "the community was saying that the mode needed some refreshing and pointed out that the interface has not changed in two years.

"From that, we use our telemetry data and see where people are getting tripped up on the most, and we see the frustrations. One of the changes there is, for example, seeing the energy of the players. That?s what you most frequently use to change your team?s lineup, and that?s information that we now put up front so you don?t have to go down several layers to find it."