New FIFA game does not include details for the Wii U version. 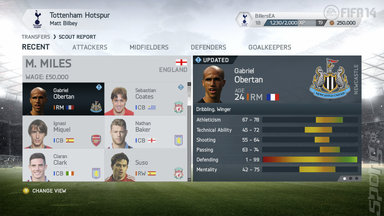 It must also be said that release date info is less than detailed: "FIFA 14 is in development at EA Canada and will be available in stores world-wide this fall. Additional platforms will be revealed in the months ahead," is the official word and we can only hope for a next-gen version and, for the sake of Nintendo, for a Wii U incarnation of the hugely well-selling soccer/football title.

There are, as you'd expect, some announcements of enhancements to Career mode among other things, there is also a New Thing!

"A new feature in FIFA 14 called Pure Shot and a brand-new ball physics system will transform shooting, making every shot attempt feel real, and when players connect with the perfect strike, feel exhilarating."

"Protect The Ball will enable players to fend-off and block defenders from the ball while dribbling at any speed, or out-muscle opponents for position before receiving the pass, then turn defenders to carve out opportunities.

"Teammate Intelligence has been improved on both sides of the ball. New decision-making logic delivers tighter, smarter marking and improved run tracking where defenders recognize opportunities to provide support and win back possession, while attacking players have new ways to outsmart their opponents by creating space for themselves, running along the backline and checking their pace.

"Sprint Dribble Turns enable players to turn in every direction at sprint speed while preserving momentum, delivering the control and confidence to take on defenders one-on-one.

"Variable Dribble Touches introduces variety on touches when sprinting. Skilled players will have better touch and more control when sprinting with the ball."

But we expect the online and microtransactional elements of the new title to be the ones that really catch the attention when they arrive via "EA SPORTS Football Club... FIFA 14 soccer's social network".

Check out all the available details here EA