Gearbox says litigation is "beyond meritless." 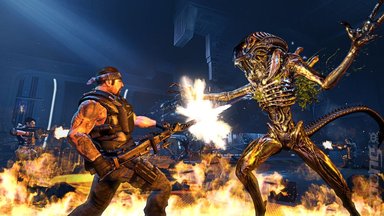 SEGA and Gearbox have responded to a class action lawsuit, refuting the allegation that it falsely represented Aliens: Colonial Marines to press and consumers ahead of its release.

That's the lawsuit we reported on Wednesday, which states that SEGA and Gearbox "never told anyone — consumers, industry critics, reviewers, or reporters — that their 'actual gameplay' demonstration advertising campaign bore little resemblance to the retail product that would eventually be sold to a large community of unwitting purchasers."

SEGA's response to Kotaku was as follows, "Sega cannot comment on specifics of ongoing litigation. But we are confident that the lawsuit is without merit and we will defend it vigorously."

Gearbox was even more confident in its reply. "Attempting to wring a class action lawsuit out of a demonstration is beyond meritless. We continue to support the game, and will defend the rights of entertainers to share their works-in-progress without fear of frivolous litigation."
Companies: Gearbox SEGA
Games: Aliens: Colonial Marines