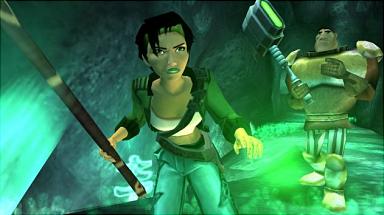 Pressure's mounting on Ubisoft to actually do something about Beyond Good & Evil 2, as CEO Yves Guillemot assures the world that the game is still in development and that the company will have "something new" to show the next time the subject is brought up.

The sequel was confirmed way back in 2008, and yet today there are still no concrete details about the game or its progress. On the back of rumours this week that Rayman and Beyond Good & Evil creator Michel Ancel was to quit Ubisoft (which the publisher vehemently denied), attention turned to the status of the anticipated adventure game.

"It's coming," Guillemot told Kotaku. "I don't give comments any more on BG&E2, because I think... the next time we communicate we have to have something new."

That didn't end up being true, obviously. So who knows whether he's planning to leave this time? Or whether Beyond Good & Evil 2 is still in development? What is real? Is this life? Who is the President?
Companies: Ubisoft
People: Yves Guillemot
Games: Beyond Good & Evil