Kojima: I Want to Make Metal Gear Rising 2 with Platinum 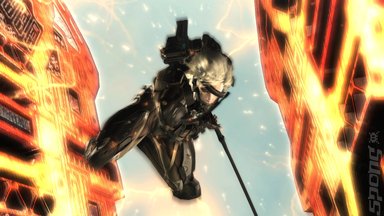 Metal Gear Solid creator Hideo Kojima has heaped a huge amount of praise on Metal Gear Rising developer Platinum Games, revealing that he would like to make a sequel to the action spinoff and would only consider partnering with the Bayonetta studio for the job.

In a roundtable attended by SPOnG, the producer also opined that Platinum is just a technological upgrade away from being "a world class studio."

"As far as [Metal Gear] Rising 2 is concerned, I really do have that in my mind, and I want to make it," Kojima explained. "And if we do make it, it would definitely be with Platinum. I don?t think anyone else could do it.

"Of course, my ulterior motive is that if Rising 2 came out, it would be guaranteed to sell! Which means that I wouldn?t have to worry about that with [new project, Metal Gear Solid] Ground Zeroes. I can just do whatever I want!" Kojima reveals more about his intentions for Ground Zeroes right here.

"Honestly, I?ve been making games for over 25 years and the state that this game was in when it went to Platinum... was really a mess! The fact that they were able to pull it off is very impressive," said Kojima on the troubled development process for Metal Gear Rising. He added that his one worry about Platinum taking on the job was its reputation for taking its time with projects.

"Platinum makes excellent games, there?s no arguing about that - but they?re not very good at honouring schedules," he laughed. "I made it clear that in order to succeed on a worldwide scale, you not only have to make a good product, but you also have to keep a tight schedule. This time, they came through and delivered the product on time. I think even [Hideki] Kamiya-san was surprised!"

Then comes the bromance. "Really, Platinum?s team is great at creating action games. They do it better than anyone else. I love them personally, as individuals... and now they?re able to do things to schedule as well! That?s very important.

"The one thing I think they can still improve on is their technological level. Their technology is not quite up to par, so maybe for the next project if we did something with them, we would maybe have them use the FOX engine. Or, perhaps their next generation engine. I?m not sure. But it?s the only point I would improve.

"If they did manage to get their technology up to par, then they would really be a world class studio."

Ergo 22 Feb 2013 18:02
1/7
In other words: Platinum is awesome, I just wish they wouldn't insist on doing 60fps games because then they don't look as good in screenshots.

yeahhhh 22 Feb 2013 20:13
2/7
What? The 60fps are a necessity for fluid action games. It is one of the most important things for the genre, just like it is for fighting games. Fluid gameplay is far more important than the game looking a little bit prettier @Ergo
more comments below our sponsor's message

BlazingPhoenix 23 Feb 2013 18:46
3/7
MGR Revengence was amazing!!(At least on the 360 I didn't play the PS3 one) It had the perfect story going to keep MGS and MGR fans waiting and wanting more. My friend told me Metal Gear Solid is SOLID snake so that means its now RISING Raiden. If(and hopefully) another MGR is made it needs to be either as good or better than Revengance.

Samwell 28 Feb 2013 19:00
5/7
Loved the game! Kind if wished for stealth camo. Remember! The two cyborgs before raiden had SC! But not a necessity. This game was way to awesome! Another one please!

YesYesYes! 28 Feb 2013 23:16
6/7
Yes, I have heard about this, and I'm all for it. Such a game could only be better and more polished after handling the game once before, and the style that game has can only be done P*. Besides, there are still things that I wanna see in this series that I don't believe will make it through DLC alone. Oh, yeah, I like Kenji Saito san, and of course, I'd like him to stay on the team, but I'd like Kamiya-san to consider working on the team next time...! :D

Awesome 4 Mar 2013 01:29
7/7
Rising 2 with raiden as the main hero again, raiden fighting new enemies and having new abilities it would be so awesome!