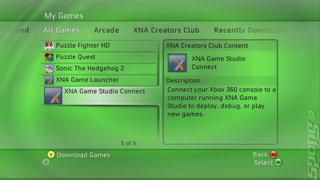 News via a leaked email this week that, while contiunuing Direct-X support, Microsoft is ceasing to support indy favourite Windows Phone, Xbox 360 and GFW development tool XNA Game Studio has been confirmed. An ill wind? Or more confirmation of a new gaming platform from Microsoft?

The initial heads-up was a partial email fragment that stated, "The XNA/DirectX expertise was created to recognize community leaders who focused on XNA Game Studio and/or DirectX development. Presently the XNA Game Studio is not in active development and DirectX is no longer evolving as a technology. Given the status within each technology, further value and engagement cannot be offered to the MVP community. As a result, effective April 1, 2014 XNA/DirectX will be fully retired from the MVP Award Program."

This was published on the blog of an XNA and DirectX developer called Promit Roy. Microsoft has now confirmed that it, "has no plans to produce future versions of its XNA development tool."

It also told Verge that, "Microsoft is actively investing in DirectX as the unified graphics foundation for all of our platforms, including Windows, Xbox 360, and Windows Phone...

"XNA Game Studio remains a supported toolset for developing games for Xbox 360, Windows and Windows Phone," the representative added. "Many developers have found financial success creating Xbox LIVE Indie Games using XNA. However, there are no plans for future versions of the XNA product."