But the public's perception differs radically... 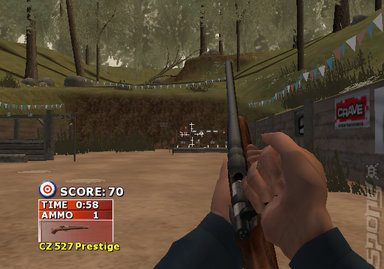 NRA Gun Club from Crave... not EA
Electronic Arts CEO John Riccitiello has had to field as question from an analyst that the publisher's top man did not want to deal with. It's about guns and games.

During an analysts call to discuss EA's recent results, Brian Patrick Fitzgerald - UBS Investment Bank, Research Division asked:
"...with the recent events that happened, any softness around first-person shooters or more mature rated games impact that you're seeing or potentially expect to see around Gun Club? And then just to follow on, what's your view of the media and political focus and how it pans out, maybe historically looking back at other hits than inside of happened?"

Riccitiello responded, "All right, so I was hopeful we weren't going to do this question, but thanks for asking. So first off, no, we're not seeing softness on -- in the FPS sector."

First-Person shooter games are still selling well. But there is more to the response:

"Secondly, I would say, I've got a somewhat unique advantage or vantage point here, working at EA and also chairing the ESRB and the ESA. Some reasonable exposure to the goings-on in Washington. I want to underline the first point. The game industry is a very mature, responsible industry, more so than you might otherwise imagine.

"First off, we're very confident in the quality of our content and the lack of actual factual linkage to any of the actual violence that takes place in America and markets around the world."

He supports this thus, "But there's been an enormous amount of research done in the entertainment field about looking for linkages between entertainment content and actual violence. And they haven't found any...

"The point is that direct studies that have been done, hundreds of millions of dollars of the research have been done, has been unable to find a linkage because there isn't one. And that went all the way up to the Supreme Court this past summer."

But there is still one major problem, "Ours is an industry with an association that has risen to that call many times before, and will, as we move forward. We're responsible, we're mature, we intend to be part of the solution. Our media reaches literally every American, and that can be used as a voice for good. And I think you'll hear more from Mike Gallagher, the head of the ESA and other industry participants, including ourselves, over how we can be part of a solution to this perception problem as opposed to, if you will, the butt of the joke. So quick summary, we're horrified, like you. It's not about games. There's a perception issue. We can be part of that solution, and we're ready to step up to do that."

Yes, the problem is one of perception.