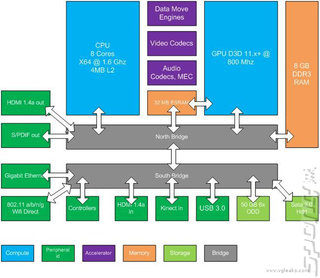 Detailed tech specifications for Microsoft's next Xbox console - codenamed 'Durango' - have appeared online in what's being reported as a rather substantial company leak.

The latest claims, from website VGleaks, state that Durango will include an 8-core CPU running at 1.6 GHz and a custom 800MHz graphics processor with a peak performance of 1.2 trillion floating-point operations per second.

8GB of RAM and a Blu-ray drive capable of reading 50GB discs are also said to be included, along with a hard drive and mysterious "Kinect multichannel echo cancellation (MEC) hardware." A diagram of the system's insides was also published.

Full apparent specs below. What do you make of them?

CPU:
- x64 Architecture
- 8 CPU cores running at 1.6 gigahertz (GHz)
- each CPU thread has its own 32 KB L1 instruction cache and 32 KB L1 data cache
- each module of four CPU cores has a 2 MB L2 cache resulting in a total of 4 MB of L2 cache
- each core has one fully independent hardware thread with no shared execution resources
- each hardware thread can issue two instructions per clock