Follows from Killer7 and No More Heroes. 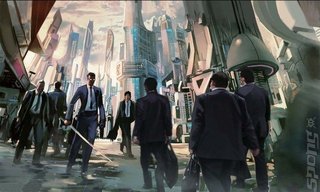 No More Heroes creator Goichi Suda has unveiled his latest project - the latest in his series of 'assassin' games titled Killer is Dead.

The game was revealed in the latest issue of Japanese tome Famitsu, and features the same cel-shaded art style that was present in some of Suda's past titles. "Development has already been ongoing for an extended period of time," the creative, also known as SUDA51, wrote in his Famitsu column, noting a release date of Summer in Japan.

Killer is Dead stars a 35-year-old cybernetic man called Mondo Zappa, a newbie executioner who is suddenly contracted to kill a number of targets with a sword in one hand and a convertible bionic arm for the other which can transform into guns, drills and other objects.

"It's the first game in the 'assassin' series that Grasshopper Manufacture has worked on in a while, a title that picks up where Killer7 and No More Heroes left off," Suda added. The aforementioned graphical style has, as a result, been improved to suit current generation consoles.

"We're trying to make a game that we'd only be able to make right now, at this point in time. The result is seen in our unique high-contrast shading seen in the graphics, as well as the high speed wrestling-like action."

It'll be developed by Grasshopper Manufacure and published by Kadokawa Games - continuing the partnership the two companies had with Lollipop Chainsaw.