SUDA51: I Don't Mean to Offend When it Comes to Sexuality

He is making a point, but through the medium of light-hearted jokes. 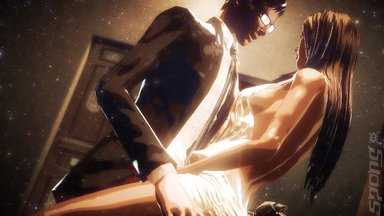 No More Heroes creator Goichi 'SUDA51' Suda makes, what can be best described as, grindhouse games. As such, there's a lot of blood, gristle and sexuality. With sexuality in games a hot topic right now, the creative said that he did not intend to offend with what he says is a humorous take on the subject.

Games Industry spoke to Suda on the arguably contentious use of sex in his games. No More Heroes features a female character who offered sex as a reward for completing missions, while Lollipop Chainsaw starred a cheerleader in skimpy outfits killing zombies. Killer is Dead continues that trend, with a Gigolo Mode that allows players to chat up girls and see under their clothes with X-ray specs.

Of course, in Killer is Dead the lead protagonist, Mondo Zappa, is a gigolo anyway. To this end, Suda said that while he understands that "sexuality is a touchy subject. We don't want to make people offended, but we're trying to create something that makes people laugh a bit because we're [dealing with] that topic."

He doesn't plan to stop creating games in this style, though. "I think in a way when you get criticism, that means people are paying attention to your work. Any kind of artistic value, anything you create, there's always some kind of criticism behind it. Which means we're making an impression and an impact. So I think we'll stay with what we're thinking and just keep going with that way of thinking."
Companies: Grasshopper
People: Goichi Suda
Games: Killer is Dead