Is Pokemon X and Y's Handheld Exclusivity a Surprise? Nope! 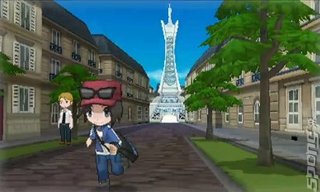 Hardcore Pokemon fans will have already read SPOnG's Game Freak interview from 2011, and know the reason why the core series remains on handheld rather than home consoles. That doesn't mean we can't dream, right? Well, with Pokemon X and Y destined for 3DS only, it looks like dreaming is all we can do for the time being.

In SPOnG's exclusive 2011 interview, Game Freak director Junichi Masuda explained, "The reason the series stays on portable consoles is because you can instantly exchange Pokemon with others, and that?s one of the core elements of the franchise. And a lot of those fellow players tend to be near you.

"For home consoles, most of the time players tend to use WiFi Connection to interact with those much farther away. If we do put the franchise on home consoles it would need to be in such a way that you could maybe play with others in the same area. That?s the kind of element we could introduce for the home experience, just like the Pokemon Wii games we have developed in the past."

That explanation dates back to the release of Pokemon Black and White. It seems that these sage words have been forgotten over time, because Game Informer was told pretty much the exact same thing regarding Pokemon X and Y, which is heading to 3DS (and not Wii U) in October.

"I can't speak to the specifics, but traditionally Game Freak has always loved the game to be on a portable device because of the communication, trading, and the experience of taking this adventure with you," said Pokemon Company's J.C. Smith.

"That's why they've always prioritised a portable version of the game first. They've always liked what you can do in the real world with that."

To be fair to Game Freak and the Pokemon Company, who must be getting quite tired of seeing this question pop up every now and then, the Pokemon name is a portmanteau of Pocket Monsters. The clue's kind of in the name. But still, we can continue to dream, right? Let's ask them again in a couple years' time!
Companies: Game Freak Nintendo
Games: Pokémon Black Version Pokémon White Version Pokémon X Pokémon Y