Could this be to circumvent Kickstarter? 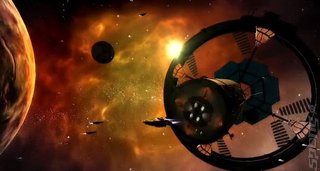 As one beloved old stager in the world of UK video games development successfully steers a re-imagining of a tried and tested game genre through public funding, another, in the form of Elite: Dangerous from David Braben's Frontier developments adds a trailer and...

Well, it also adds a separate PayPal funding option. We'll start by looking at the trailer for the remake/boot/imagining of the classic space trading title:

Now, the current stats on the project, which calls upon almost a DNA-level gaming memory for those of a certain generation, are as follows as I write this (and I'm of that generation):

The PayPal option comes in useful for that group of people who don't have credit cards for Kickstarter login and use. Check the project here.